Law of the Land

On this day, 29 August 1917, Canada’s Governor General, his Grace the Duke of Devonshire, signed into law The Military Service Act, 1917 (MSA). Thus, all male British subjects age 20 to 45, who were "ordinarily resident in Canada," and had been "since the fourth day of August, 1914, resident in Canada," were henceforth, "liable to be called out...on active service in the Canadian Expeditionary Force [CEF] for the defence of Canada, either in or beyond Canada." For the first time in Canada’s young history, compulsory service was the law of the land.

Prime Minister Sir Robert Borden had declared to his constituents in December, 1914, that "there has not been, [and] there will not be, compulsion or conscription." However, his hasty commitment just a year later to raise a force of 500,000 men had been made before the CEF had been first blooded, sustaining 6,000 casualties at Second Ypres alone. Moreover, while recruiting levels over the next year remained fairly high, after April 1916, and in the wake of ever-increasing casualties, they experienced a precipitate decline. And so, with Canada’s costly tactical victory at Vimy Ridge (10,602 total casualties, including 3,598 dead), and only 4,886 volunteers the month before, Borden faced a major dilemma. He could reduce the size of the Canadian Corps to three infantry divisions or perhaps to two, or he could implement compulsory military service. In a remarkable reversal of policy, he chose the latter, thus unleashing a divisive political storm, the likes of which Canada had never seen.

Public opposition to the MSA was immediate and featured protests large and small. Indeed, such opposition manifested itself in a most dramatic and troubling fashion in Quebec, but general resistance to compulsory service eventually reared its head from coast-to-coast. Over the next eight months, Canada would be gripped by heretofore unknown levels of fear and recrimination, just as tens of thousands of conscripts made their way overseas - crucial reinforcements for the campaign of 1918. 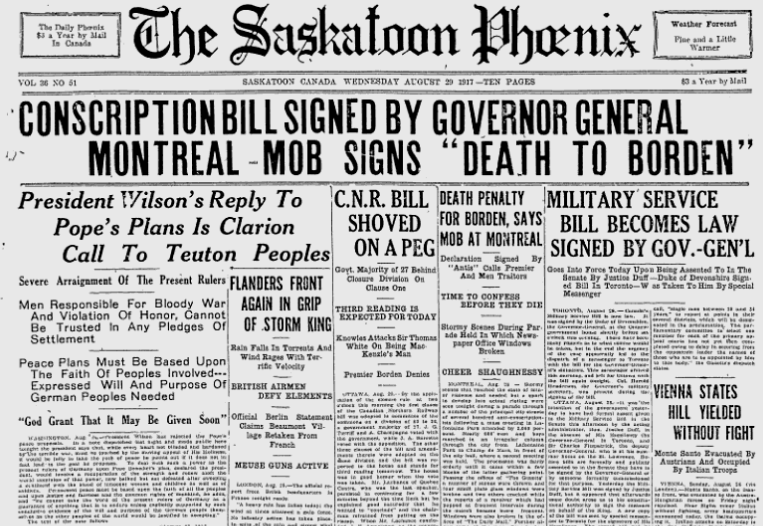 Pte Tokutaro Iwamoto came from Hiroshima, Japan before moving to Canada. He joined the 10th Bn, CEF during World War 1 and fought at Vimy, Hill 70 and Passchendale-earning a Military Medal for bravery. He was killed-in-action on 2 Sept 1918 with only 10 weeks left in the war. https://twitter.com/CAFinUS/status/1372218524605747206

He emigrated from Japan and fought at Vimy Ridge. He earned the Military Medal at Hill 70.

Upon return, he had to fight for the right to vote.

In 1942, Canada called him an enemy alien, seized his farm, and forcibly relocated his family.

@Renee_Davis2 and I wrote a paper about the @CanadianForces's Casualty Identification Program for this special issue. Be sure to check out the great papers on how war dead are recovered and identified in various countries.

#OTD in 1945 Sergeant Aubrey Cosens of the @queensownrifles performs a feat of outstanding bravery. He is killed in the action and posthumously receives the Victoria Cross, the British Commonwealth's highest gallantry award.

This is a sad but wonderful Valentine's Day story. Harrison is right - he was "lucky" in every way.

MMs were indeed comparatively rare for conscripts - less than 1% of 6000+ awarded for actions during the Hundred Days, plus two DCMs. So yes, research shows a fair bit of discrimination despite battlefield performance comparable to volunteers. For more see https://www.ubcpress.ca/reluctant-warriors

At my FB Group a member said that MSA conscripts with MMs were rare. According to the LAC database of 3131 service reg. no. there are only 4 medals, 3 MM, one foreign decoration. Was this institutional bias against conscripts. No way it reflects their bravery.